13 Things Mentally Strong Parents Don’t Do
Raising self-assured children and training their brains for a life of happiness, meaning, and success. by Amy Morin A book summary by Eric Johnson


This book is a list of 13 bad parenting behaviors and what you can do about each behavior as a parent. I like that its totally practical and you can immediately run out and start applying Amy Morin's advice.

By the way, I see plenty of my own flaws listed in the 13 bad kid behaviors. Thats a little uncomfortable.

The author is a therapist who specializes in children. 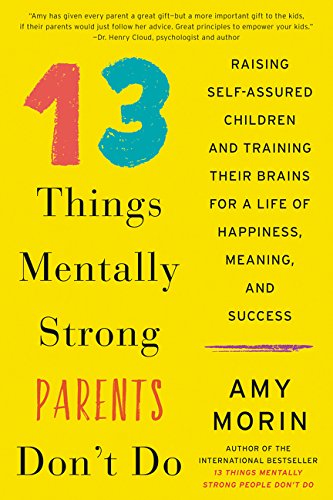 Victims give up control and feel powerless to change things. One reason parent’s might encourage this is because they can’t bear to watch their child struggle. Rescuing a child too quickly means they never learn the skill and depend on others.

2. Don’t parent out of guilt

Don’t avoid short term discomfort (as a parent) for long term pain (at the expense of the child).

3. Don’t make a child the center of the universe

Kids who feel extra special are more likely to lash out when criticized. Being nice to my kid doesn’t mean he will be a nice kid. The need for admiration is never satisfied. Instead it leads to less empathy, more dissatisfaction, and the kids don’t persist at hard things – these kind of people are not happy people.

Parents can be overprotective and over involved if they make decisions based on avoiding anxiety instead of what’s best for the kid.

5. Don’t give a kid power over myself

This happens when parents don’t want to be in charge, lack leadership skills, or lack emotional support and try to get it from their kids.

Kids should have as much power as possible so they can learn to be independent (Montessori). But too much power is a problem too. Kids who don’t have enough rules struggle with lack of self control. For example this can lead to health problems if they choose junk food, video games, and not to brush their teeth. Kids without enough rules also tend to have anxiety, depression and risky behavior.

One reason parents do this is because its hard to know how high to set the bar. Often they compare their kids to other kids to figure that out but every kid and situation is different and so kids will perform differently. Another reason is parents making up for their own childhood. Examples: tiger moms, stage moms, sports dads

Demanding perfection doesn’t lead to perfect kids. Kids who strive to be perfect are at higher risk of anxiety and depression, binge eating, procrastination, and interpersonal conflict. Kids who feel they can’t live up to parent’s expectations grow up to never feel satisfied despite their accomplishments. Kids who are trying to appear perfect will hide these problems and won’t ask for help. They are not mentally strong, they are just acting tough for approval.

Parents who do this don’t realize teaching responsibility takes prolonged effort and doesn’t happen by itself. Also they focus too much on grades, colleges, and jobs, and not enough on teaching skills that apply to other parts of life. “Just because your teen gets good grades and is good at sports doesn’t mean she’s equipped to become a responsible adult.”

Kids who don’t do chores stay immature and never develop accountability. “Your child’s future boss – or partner – isn’t interested in someone who still relies on his parents financially, physically, and emotionally.

Read other articles
← The Formula The Secrets of Happy Families →